Beth Connelly, Costume Designer in Residence: Beth has been the costume designer for the CoSA Musical Theatre and Drama productions since 2012.  She has designed and costumed professionally throughout San Diego at theatres such as Diversionary Theatre, San Diego Musical Theatre, Leading Light Theatre, Cygnet Theatre, Lamb's Players, as well as many youth theatre conservatories.  Beth is proud to be the parent of a CoSA graduate, Mitch Connelly '14, and a daughter, Emma Connelly, both of whom reside in New York City and work in the arts, Emma does costume work for film and television and Mitch is a working actor.  Beth also serves as Executive Administrator of the CoSA Foundation.
Valerie Henderson: Henderson consulted as Costume Designer for many of CoSA’s Musical Theatre productions. She earned her M.F.A. in Costume Design and Technology from San Diego State University, after receiving a B.A. from the University of Northern Iowa. In 2009, she was costume designer for the American Dance Festival in North Carolina, and has also designed several modern dance works in San Diego with companies including Joe Alter Dance Group, Malashock Dance Company, and Little Known Dance Company. Henderson consults for the North Coast Repertory Theatre, Moxie Theatre, and Diversionary Theatre, and San Diego State University’s theatre department.
Cara Tougas: Tougas, a M.F.A. degree candidate in Scenic Design at San Diego State University, consulted on CoSA Musical Theatre productions.  She was scenic designer for SDSU’s Theatre Department’s productions of Symphony of Clouds (2011) and The Boyfriend (2011), and scenic assistant for The Magic Flute (2011), produced by SDSU’s Department of Music and Dance. Tougas spent a month in Moscow, Russia studying Scenic Design at the Moscow Art Theatre School in 2010.
Chad Dellinger: Chad is very excited to return to the CoSA stage. He recently received a Master of Fine Arts in Scenic Design from San Diego State University. Chad's work has been seen on the stages of The Hollywood's Blank Theatre, The Carlsbad Cultural Arts Center and the Scripps Ranch Theatre. In 2014 Chad worked in the design office of The Old Globe Theatre assisting on Bright Star and Othello. Chad has assisted with Ralph Funicello, Sean Fanning and is currently working with John Icaovelli. For more information please visit www.chaddellingerdesigns.com.
Classical and Contemporary Dance 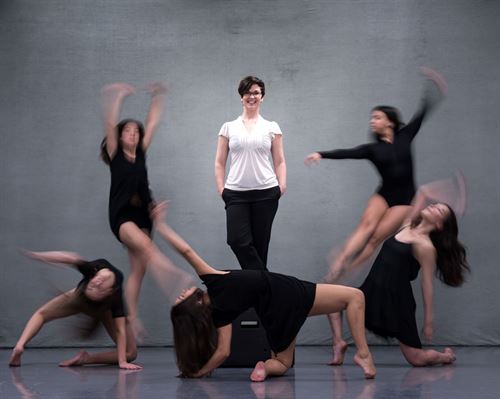 Anna Woerman, M.Ed. Graphic Design/Filmmaking:
An alumna of CoSA, Anna is now in her 12th year teaching in CoSA’s Digital Arts conservatory. She teaches Graphic Design, Filmmaking, DigArts Art Foundations, DigArts Portfolio, Digital Media Foundations, and Yearbook at Coronado High School. Anna received her BA in Art and a minor in Italian from San Diego State University, her Masters of Education in Curriculum and Instruction from University of San Diego, and her Administrative Credential from the San Diego County Office of Education. She is a K-12 Adobe Education Leader, and a professional artist, photographer and graphic designer. Her artwork has been in group shows in San Diego and Florence, Italy and her design and photography have been featured in numerous blogs and publications. You can view her work at annawoerman.com.
Riana Bucceri, Animation/Game Design and Conservatory Chair:
Riana loves the art of animation and admits that she still loves to watch cartoons on Saturday mornings. She graduated with a B.F.A. in Digital Media and Animation from the College for Creative Studies, Detroit Michigan. The Michigan native moved to Southern California and began her teaching career at the San Pasqual Academy, a Court and Community School for foster teenagers, where she implemented a new technology program. Migrating to CoSA in 2003 she continues to teach various aspects of digital arts including; Animation, Photography, Digital Media Foundations, and Design in New Media classes. Her continued passion for learning and teaching fueled Riana to pursue a master’s degree at High Tech High Graduate School of Education, Point Loma, CA. There she graduated with a M.Ed. concentrating on project based learning, differentiation for students, and developing teacher leadership initiatives. The emphasis within her educational work is to create, execute, and finalize digital media project-based learning concepts that connects students to the “real world”. She has written years of curriculum, benchmarks, and multiple UC approved courses including Video Production, Graphic Design, Animation, Game Design, and Design in New Media courses for CoSA Digital Arts, CTE Online, and San Pasqual Academy. Additionally Riana developed the Arts, Media, and Entertainment CTE website and continues to work closely with the representatives from the California Department of Education as Webmaster of the site. Riana has always had a passion for teaching and learning since she can remember and that is still true as of today.
Instrumental Music Faculty and Coaches

Karrie Jackson:
As a Creative Advisor, Karrie Jackson offers a range of experience from coaching individual studio art practice, public art projects, community art events, and arts program development. Mastering the Art of individualized support, Ms. Jackson specializes in inspirational counsel, coaching authenticity, transformation, joy and inspiration with a distillation of creative processes through diving deep into intent development making room for intrinsic creative expression.
Background
​Ms. Jackson has over 25 years of experience as a Creative. completed her undergraduate training at California College of the Arts, San Francisco, With Distinction; obtained a Masters of Education, Curriculum & Instruction - Integrated Teaching through the Arts, from Lesley University; and a Single Subject Teaching Credential in Visual Art from Point Loma Nazarene College. She has been a free lance artist in addition to being an educator and leader since 2003.
​Coaching and Creative Program Advising
​Ms. Jackson worked as a Visual Art Consultant for Coronado School of the Arts (CoSA) starting in 2010 and is the CoSA’s Visual Art Department Chair since 2012. As the CoSA Visual Art Department Chair, Ms. Jackson facilitates a working artist studio developing individualized instruction for a range of skill levels grades 9-12 as well as guiding students in College Portfolio preparations, Public Exhibitions, Art Foundation Workshops and live Figure Drawing. As a Visiting Artist for Coronado High School, Ms. Jackson has organized and co-teaches screen printing workshops, mural production and Chalk Walks as well as workshops that develop traditional art skills and abstraction. Ms. Jackson coaches students to develop naturally authentic creative practices. She offers a variety of resources including exploration of materials and technique.
As the Director of Arts for Learning in Coronado Unified School District, Ms. Jackson  has worked in partnership with a Non-Profit Arts Contracting Agency, Classroom Teachers and Teaching Artists to guide and advise the collaborative creation quality Arts Integrated English Language Arts Lessons at the Elementary, Middle and High School levels, She has guided over 80 professionals in the field, honing in on team meetings to weaving in the dynamic needs of both educational requirements and creative processes for Visual Art, Dance, Music, and Performing Arts. Overseeing an annual budget of over $100K to maximize implementation of materials, Teaching Artist Contracts, professional development,  and extra-curricular events, Ms. Jackson has organized collaborations through dynamic schedules, use of facilities and project outlines in the best interest of all parties involved. Prior to her role as Director, Ms. Jackson also co-developed VAPA Curriculum for the Coronado Unified School District grades K-5 based from the new National Core Standards. Ms. Jackson has worked with Counseling Departments at both the high school and elementary school level to develop projects that promote positive student culture.
​On multiple occasions, Ms. Jackson's projects have extended out into the community. She has worked directly with the City of Coronado, The Coronado Cultural Arts Commission, The Coronado Historical Association, Adult Education and Community Hospital and Nursing Home. She has also worked to coach adults in developing their fine art explorations through local Adult Education Program based on individual intent for personal growth. As an agent of Arts Healing, she worked with the elderly in local hospital and nursing home on individual an collaborative crafts to uplift spirits. She also developed a Mindfulness and Art course that focused on guided mindfulness meditation both with music and out in nature followed by dream journaling and exploration of personal symbolism. through art Through her work with the City, she has organized both personal and educational exhibits and public projects in the community.
​Ms. Jackson owned and operated a free lance business from 2003- 2017 with projects and commissions scoping from private lessons, painting, design, large scale artworks and landscaping installation. As a small business owner, Ms Jackson has guided students in setting up an EIN with local and state permits, advised on budgeting, income statements, contract negotiation, web design and intent development.
​Studio Art
​With a primary focus on landscape painting in acrylic, Karrie Jackson is known for her Coastal Impressionism. Setting out to capture the joy and beauty of the natural Coronado shoreline, especially the enjoyment of youth and surf culture, Ms. Jackson designs original compositions from her own photography and stylizes her work through rich color and loose application of paint. Each piece expresses the essence of a moment, and above all aspires to bring joy to the viewers. As a part of Coronado's Centennial Celebration, Ms. Jackson exhibited her work along side other local artists in the Grand Opening juried exhibit at the city's C3 Gallery. Ms. Jackson has developed a wide range work in order to facilitate a strong foundation for teaching. Her body of work includes architectural paintings such as the large scale commission of luxury home paintings by American West Group, Denver, CO as well as still lives, botanical, pet commissions and figurative work.
Please reach out if you are interested in developing creativity through personal practice, program development or instructional practices.
Guest Artists:
Jessica Harrison: Like many families in Coronado, Jessica grew up in the Navy. When she was eight her family moved to Coronado and was lucky to stay there for the next 11 years. Jessica has always loved art. Upon moving to Coronado, Jessica started taking Chinese Brush Painting classes with Lucy Wang and continued until she was 16. In high school she was in the CoSA Visual Art Department. Outside of high school, Jessica, at 16, started attending Watts Atelier of the Arts, and has been going there ever since. She is pursuing her goal to be a fine artist  specializing in portraiture.

Caitlin Kuhwald: Caitlin Kuhwald received a BFA in Illustration from the California College of Arts
and Crafts, and an MFA in painting from the Pennsylvania Academy of the Fine arts in
Philadelphia. She returned to San Francisco after grad school to teach at her alma mater for
nearly eight years. At CCA she taught illustration, drawing and watercolor, and she was also
the Program Expert (Advising Liaison) for the illustration department. Her illustrations appear
in various magazines, books and other media. And her work has been recognized by American
Illustration, The Society of Illustrators, Communication Arts and 3x3. She lives and freelances in Los Angeles.